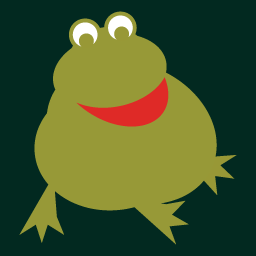 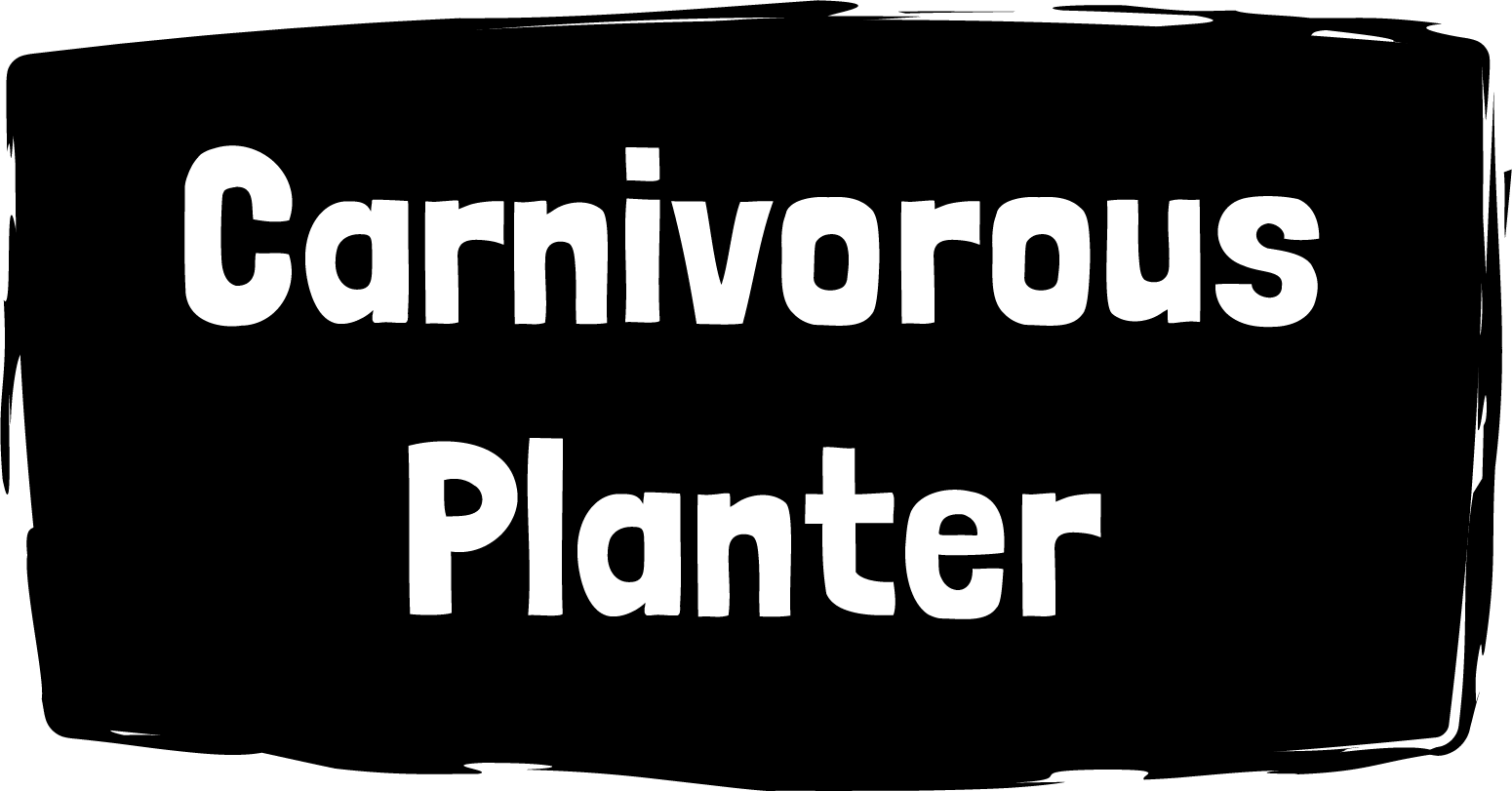 My carnivorous plants –  a pitcher plant, dubbed The Kool-aid Plant, and a Venus fly trap, named Gerald – could do with a home remodel. To keep the humidity up around them, I put an old candy container over the top of the pot I bought for them. It works well at keeping moisture in, but it’s got a few drawbacks.

To solve this, I’m going to design a new home for my bug-munching friends. I have no idea what I want it to look like, but it needs to look good; whatever that means.

But why not just buy one? There’s plenty of cool, move-in-ready solutions for rehousing those plants.

Yes, that is certainly true. I could find something I like and just buy it… But I don’t want to. I want to design my own, so I will. I’m taking advantage of an opportunity to do a small and fairly simple design project while I’m also in the midst of a larger, more complicated design project.

A prioritized list of key, high-level features the completed project needs to include. This list drives the design and development of the project and keeps focus on what is important. Referring back to this list at major milestones is important to avoid ending up with a finished project that misses the mark. 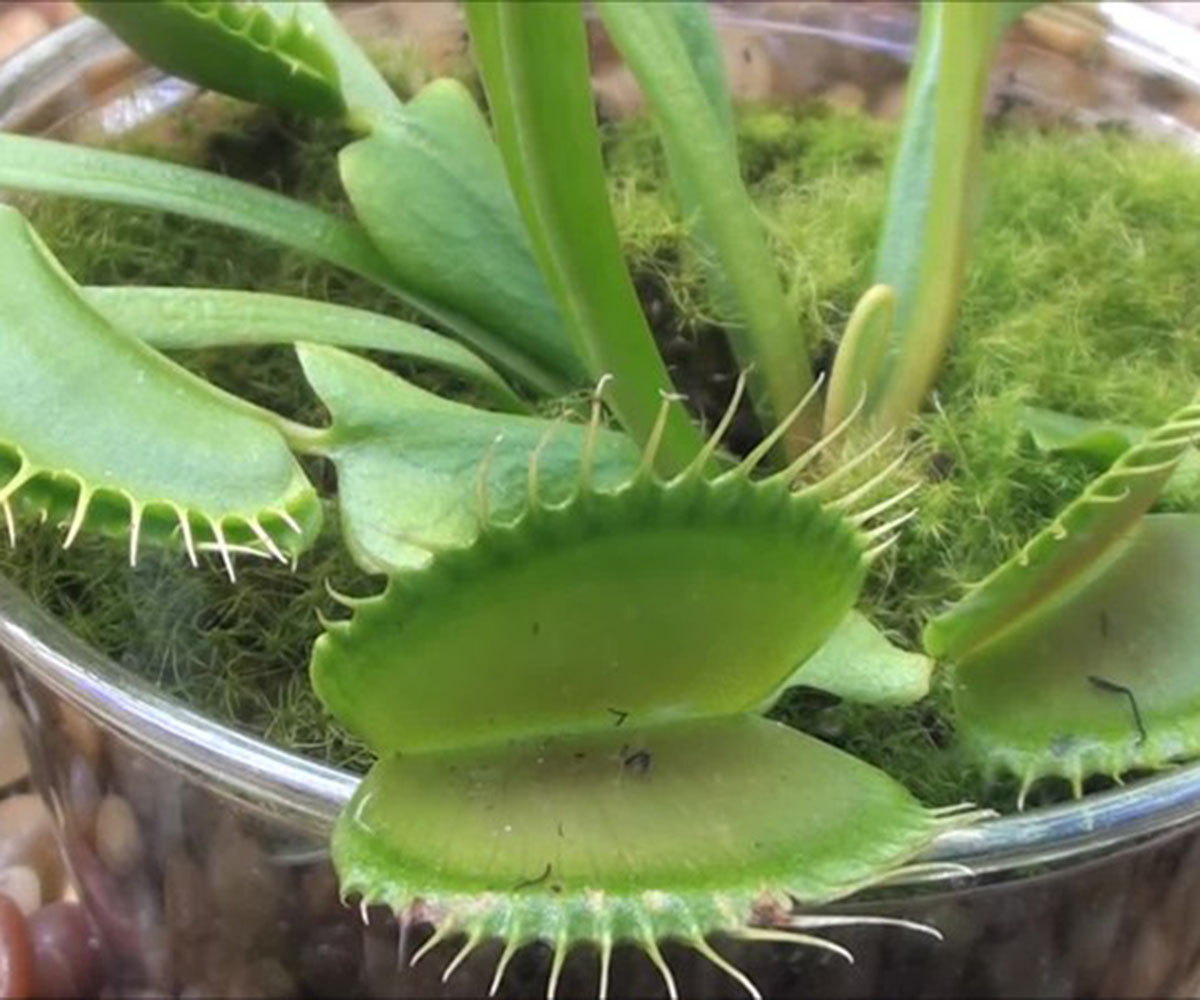 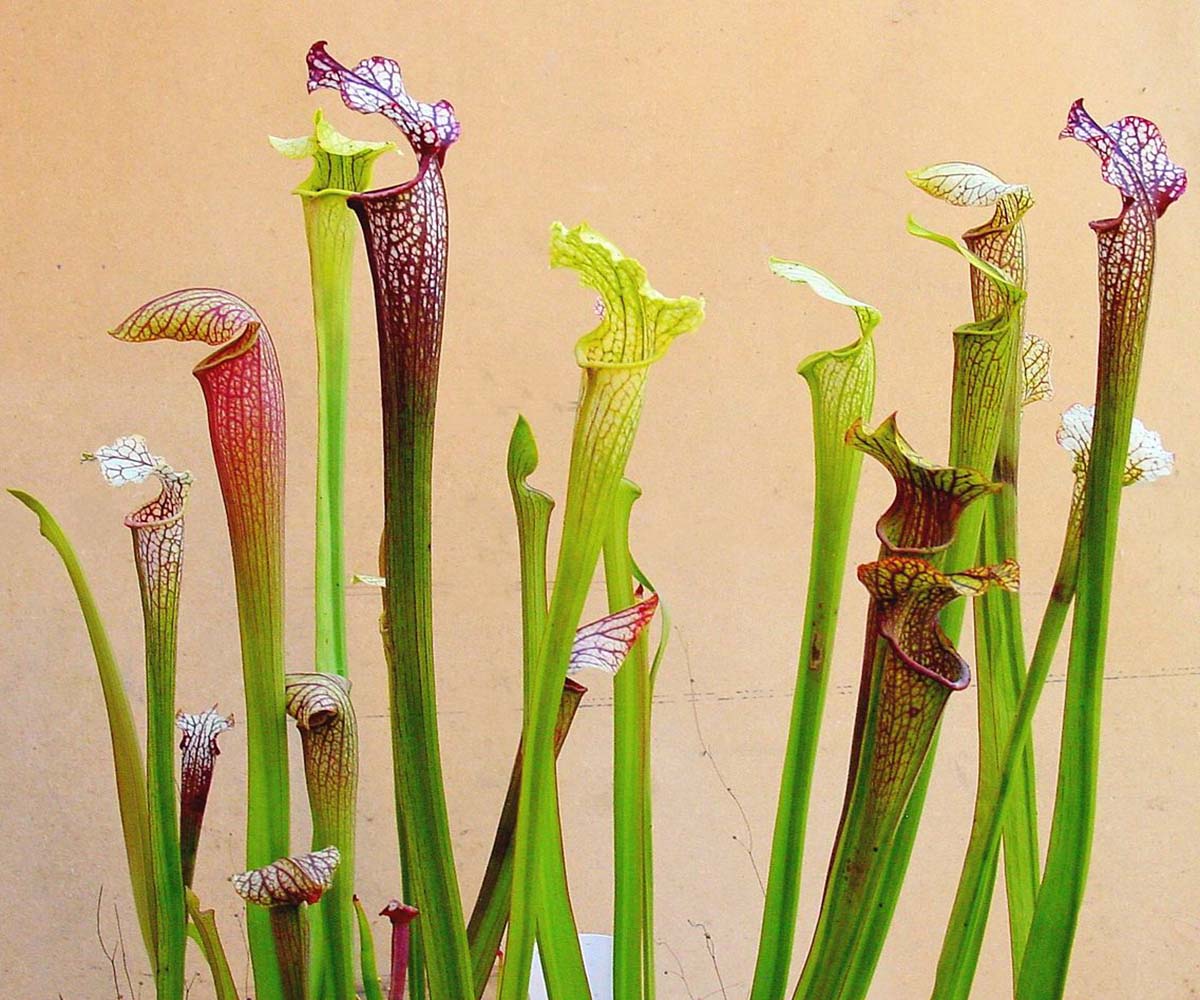 After some research into Venus flytraps and the pitcher plants I have, I’ve concluded the following from the sources listed at the bottom of this post: 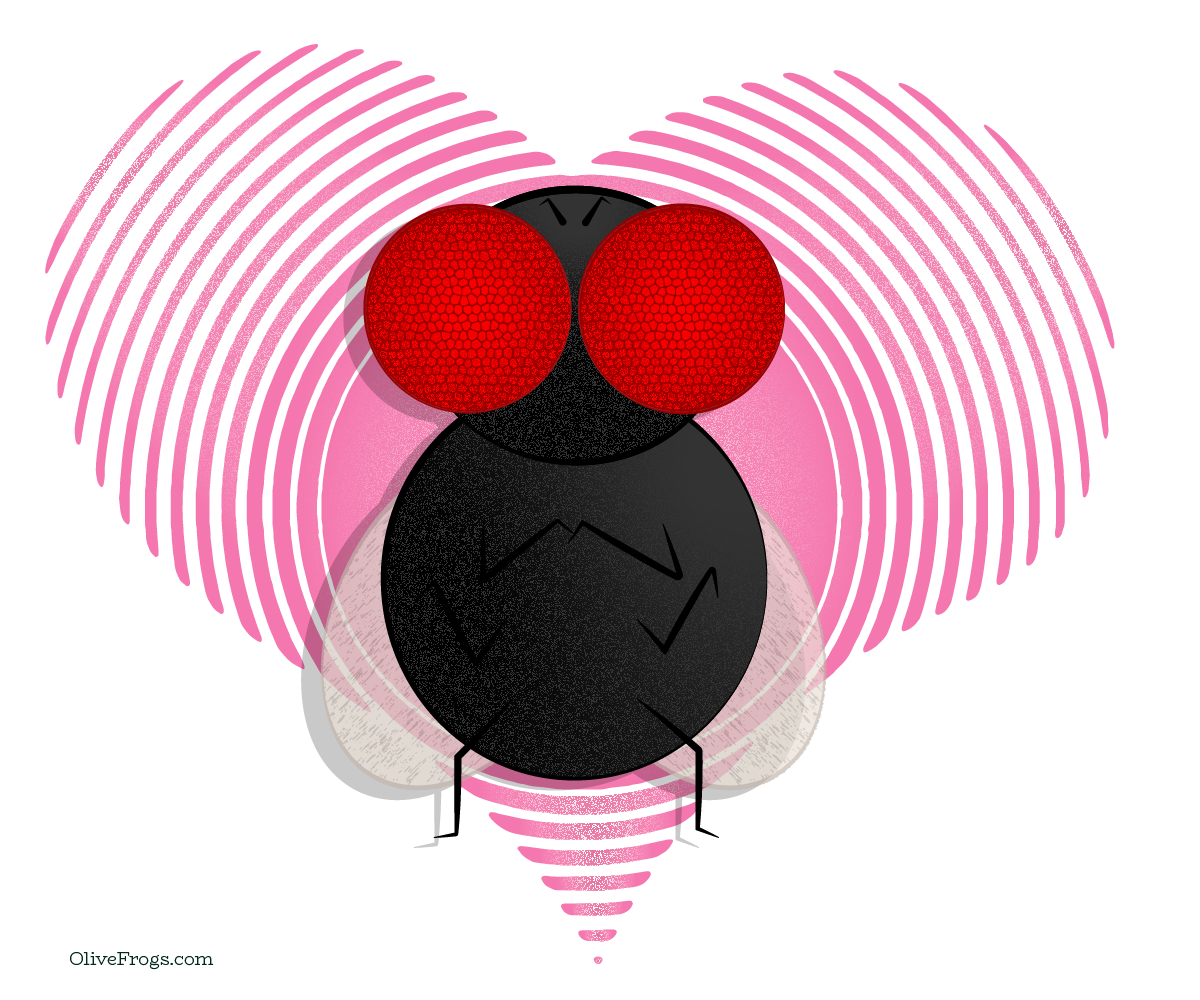 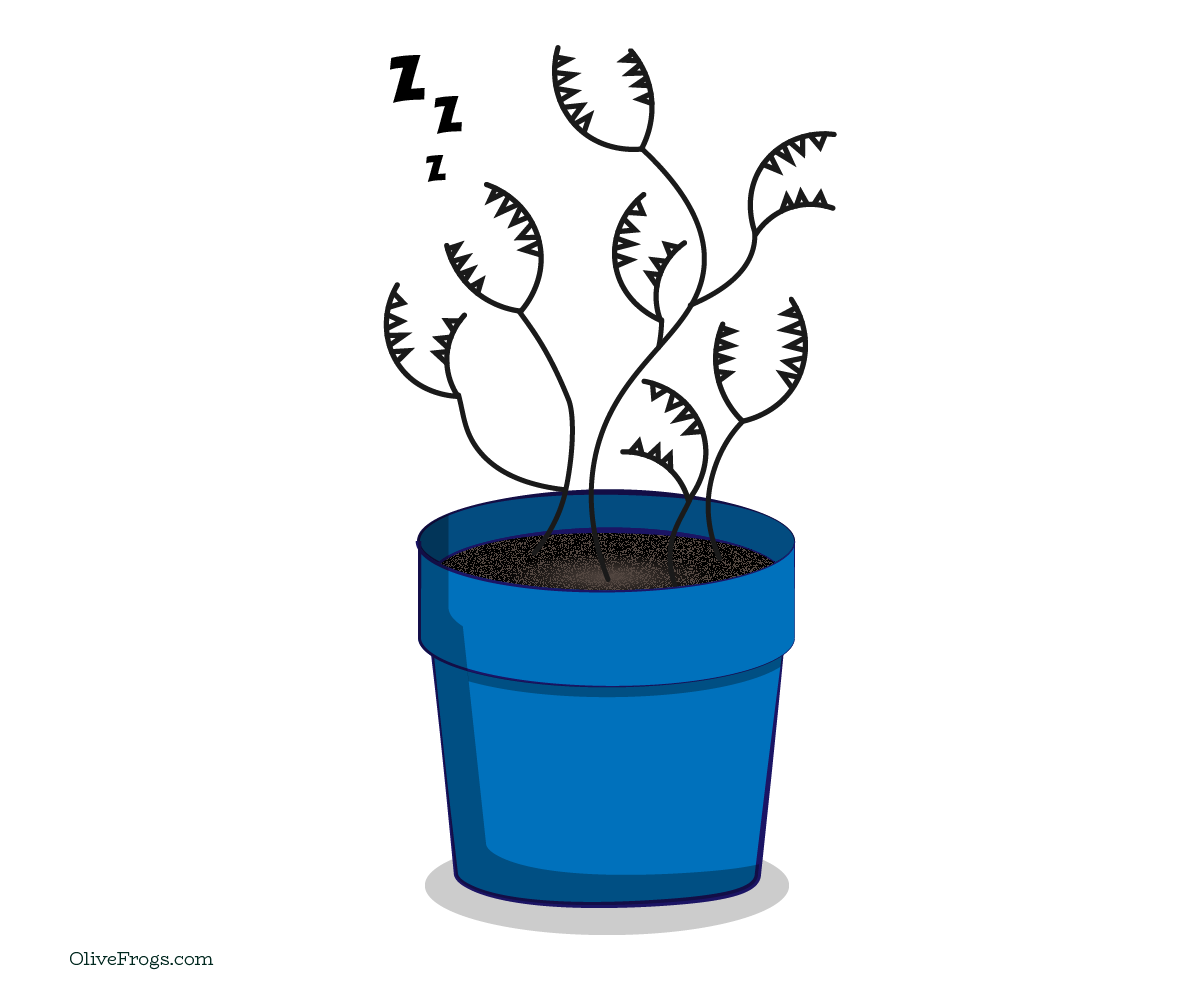 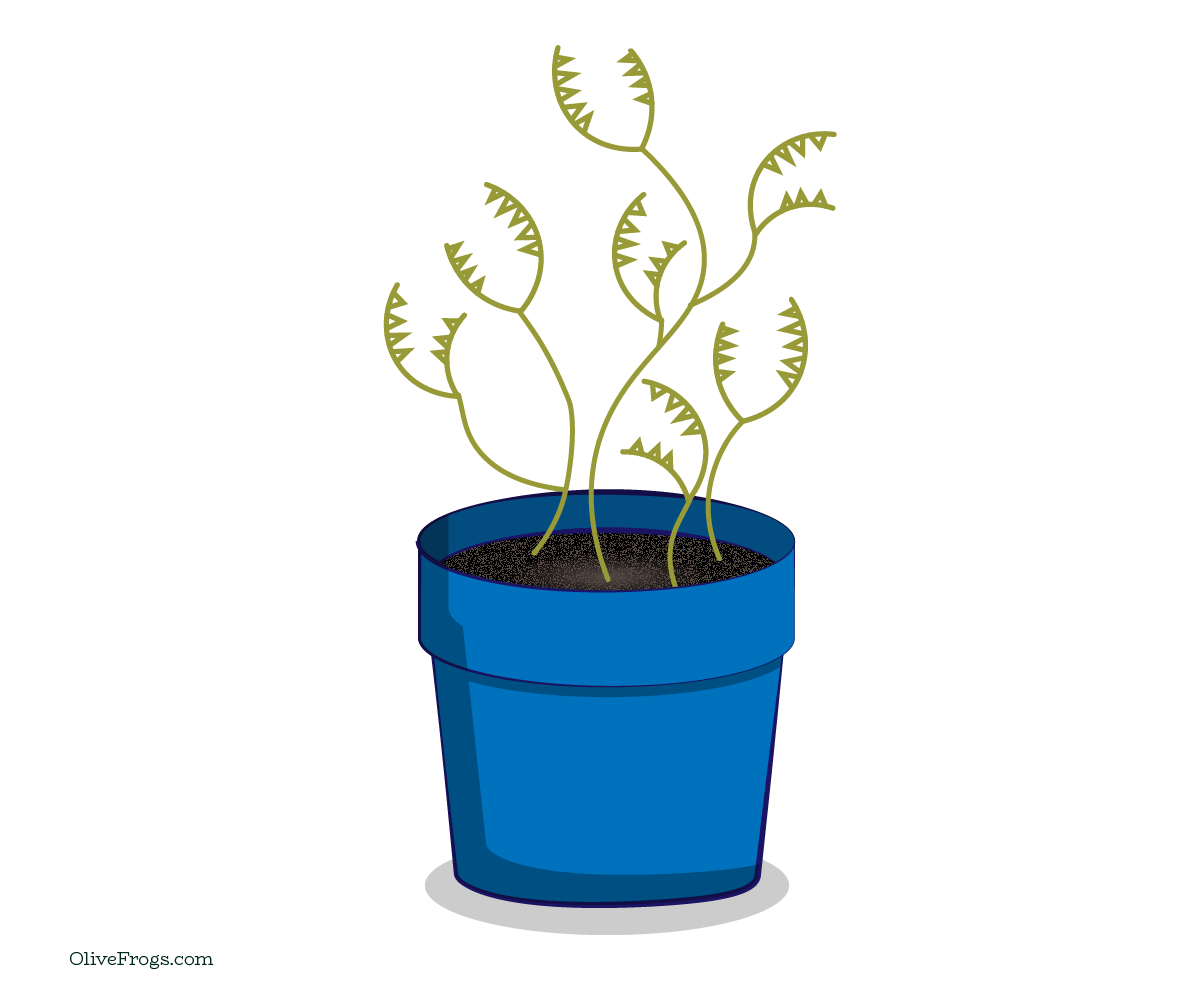 Questions? Concerns? Have I missed any important care and feeding notes? Please let me know in the comments section at the bottom of this page.

Back in early January when I opted to do this project, I had very simple concepts in mind. While doodling in my notebook trying to figure out something completely unrelated to this project, a cooler, yet more complicated concept came to me. Click the image below to see the short progression of sketches. 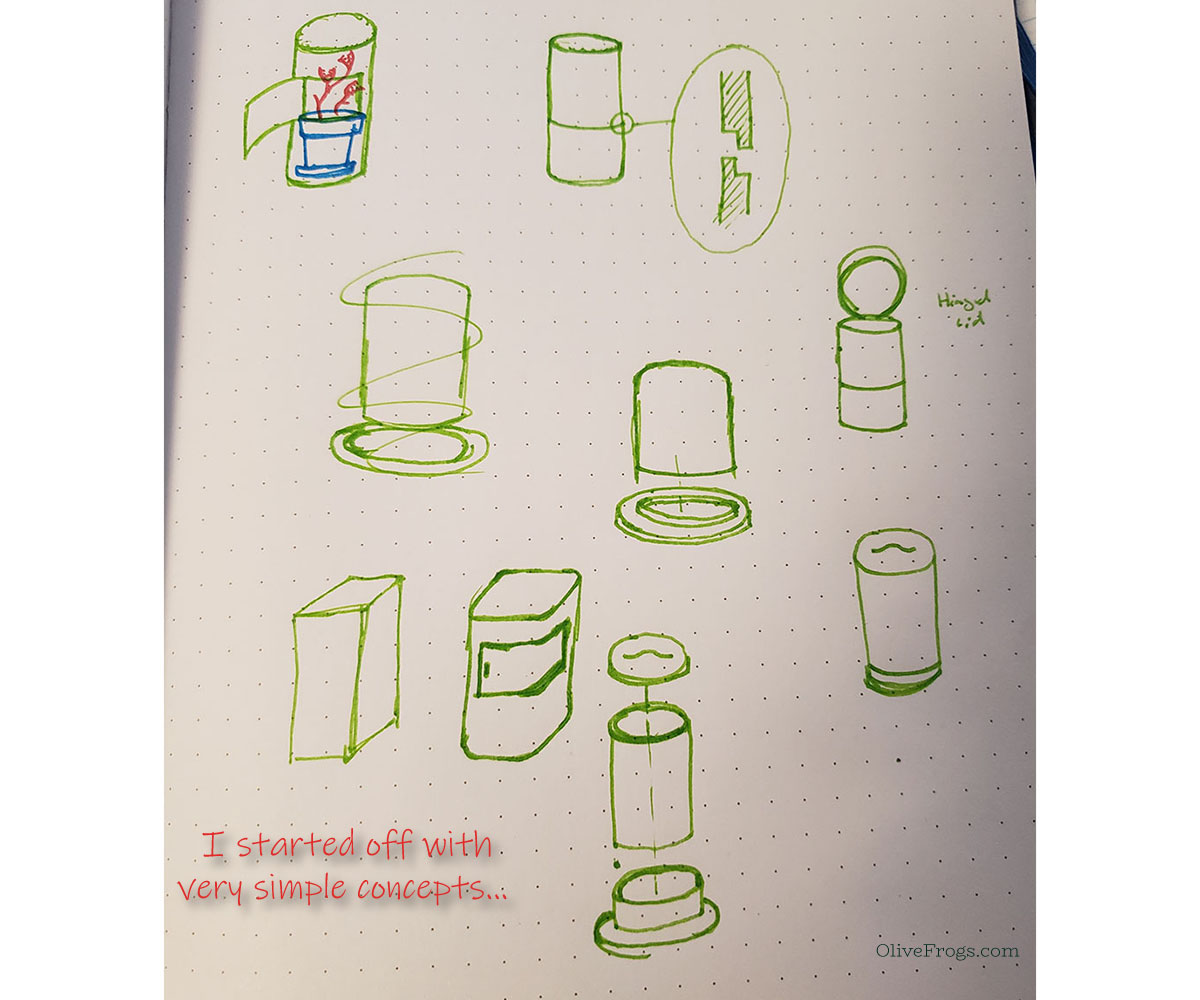 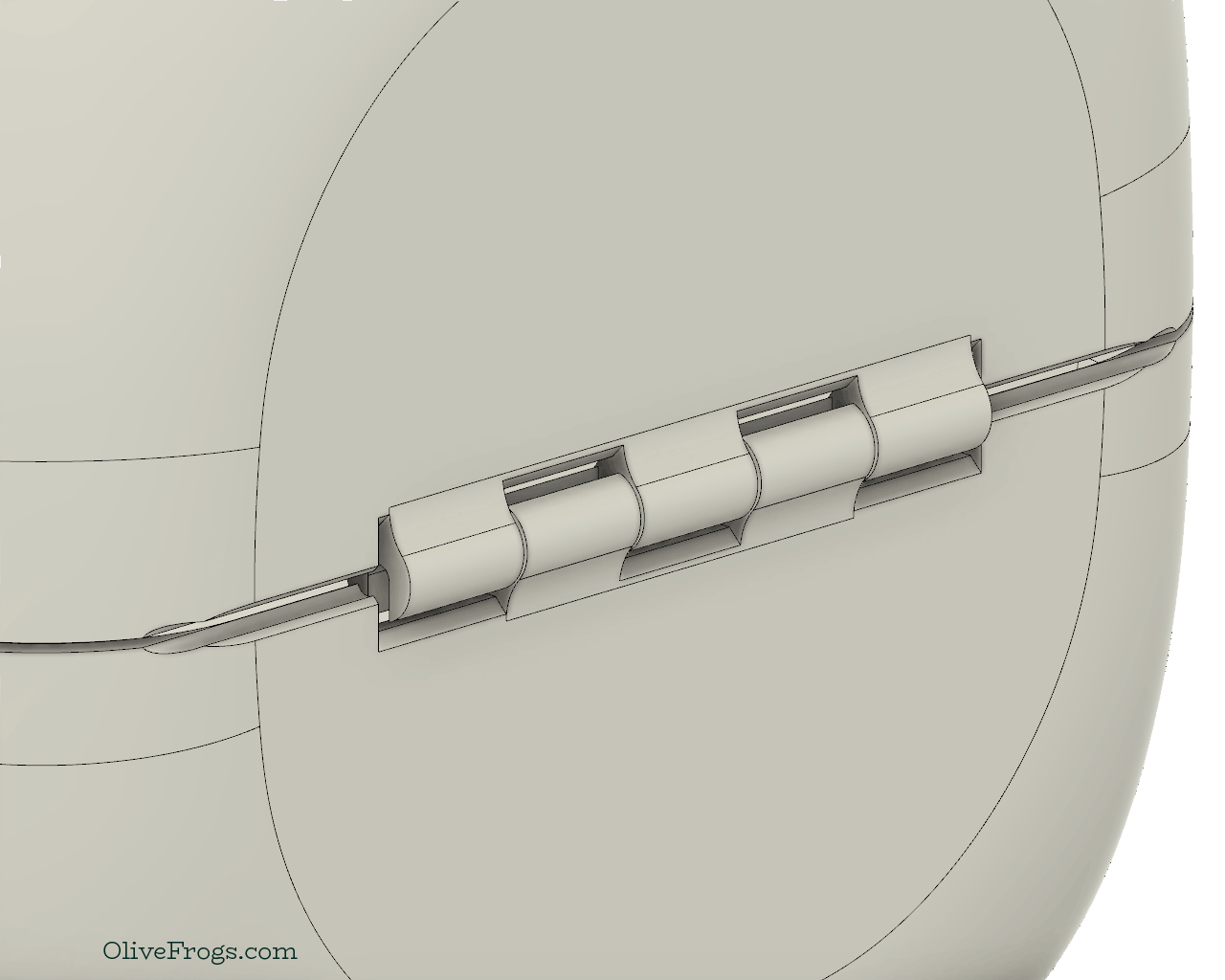 The parts of this planter will be 3d printed, molded, and then cast, likely using a matrix mold since the parts will be fairly large, and I don’t want to use up a lot of expensive silicone. I started modeling and printing back in January 2020, before I had the engineering requirements worked out. I made some decent progress modeling up the planter in Fusion 360. It wasn't smooth progress, but it was something. I got the head modeled with an undercut-free hinge between the two halves, but I struggled when it came to modeling the mouth. I tried using the form tool first, but I lost patience with it honestly. I also tried making the lips with the loft tool, but I wasn't happy with it. Its mouth ended up looking too friendly. Menacing and eager-to-devour-you is more what I was after. For eons, I've meant to learn Blender for organic modeling. Blender Guru's Donut Tutorial YouTube series is definitely in my "watch later" list. 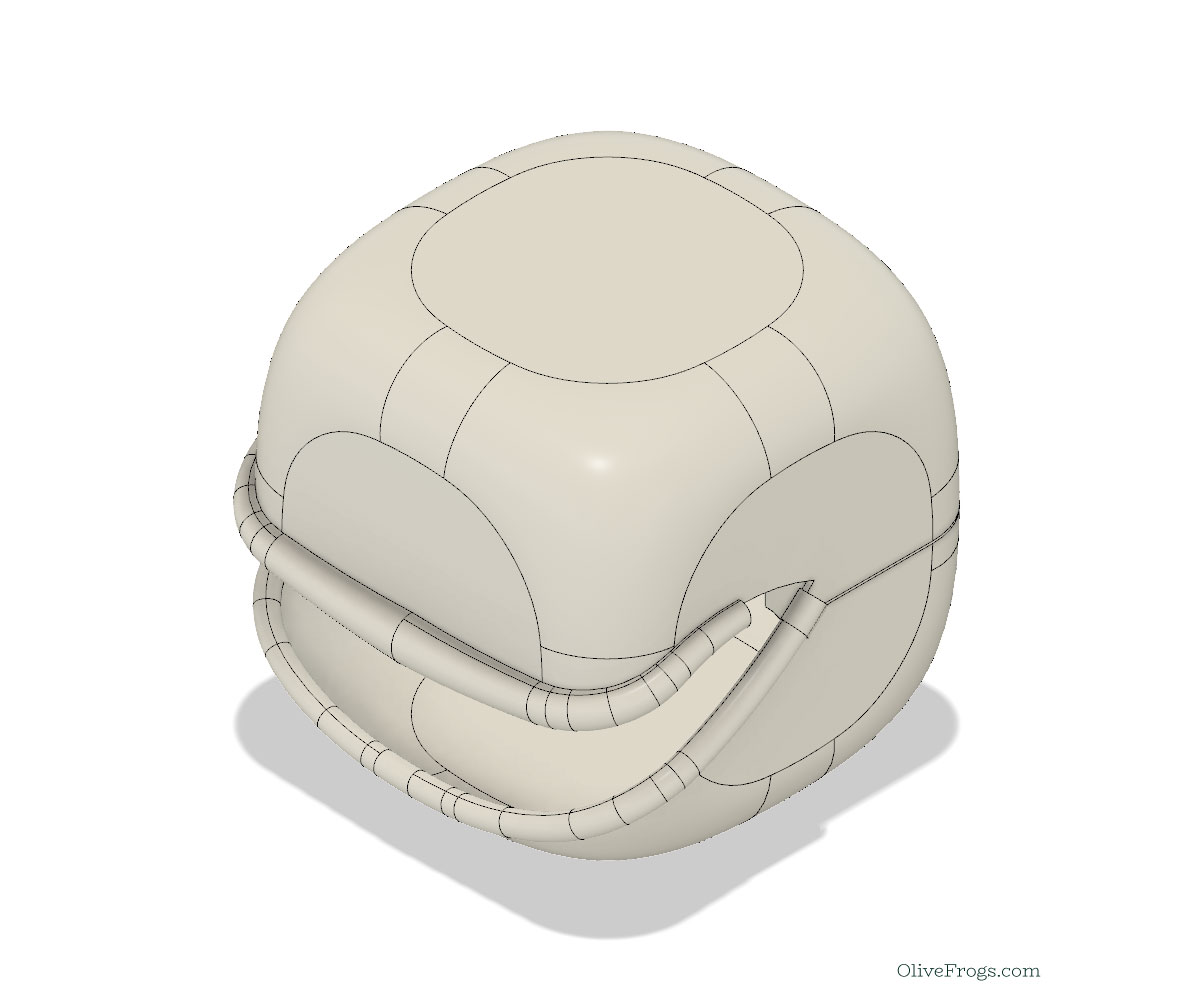 Immediately after I finished modeling the head, I output .stl files for 3D printing and started printing the bottom half, a 17-hour print. In all my excitement to move forward and get parts printing, I jumped the gun. *Facepalm* Looking at the part in my hands, it was apparent it wasn't deep enough. I could and should have seen that in Fusion BEFORE I printed the part. There are a few obvious things I should have done differently to avoid this: 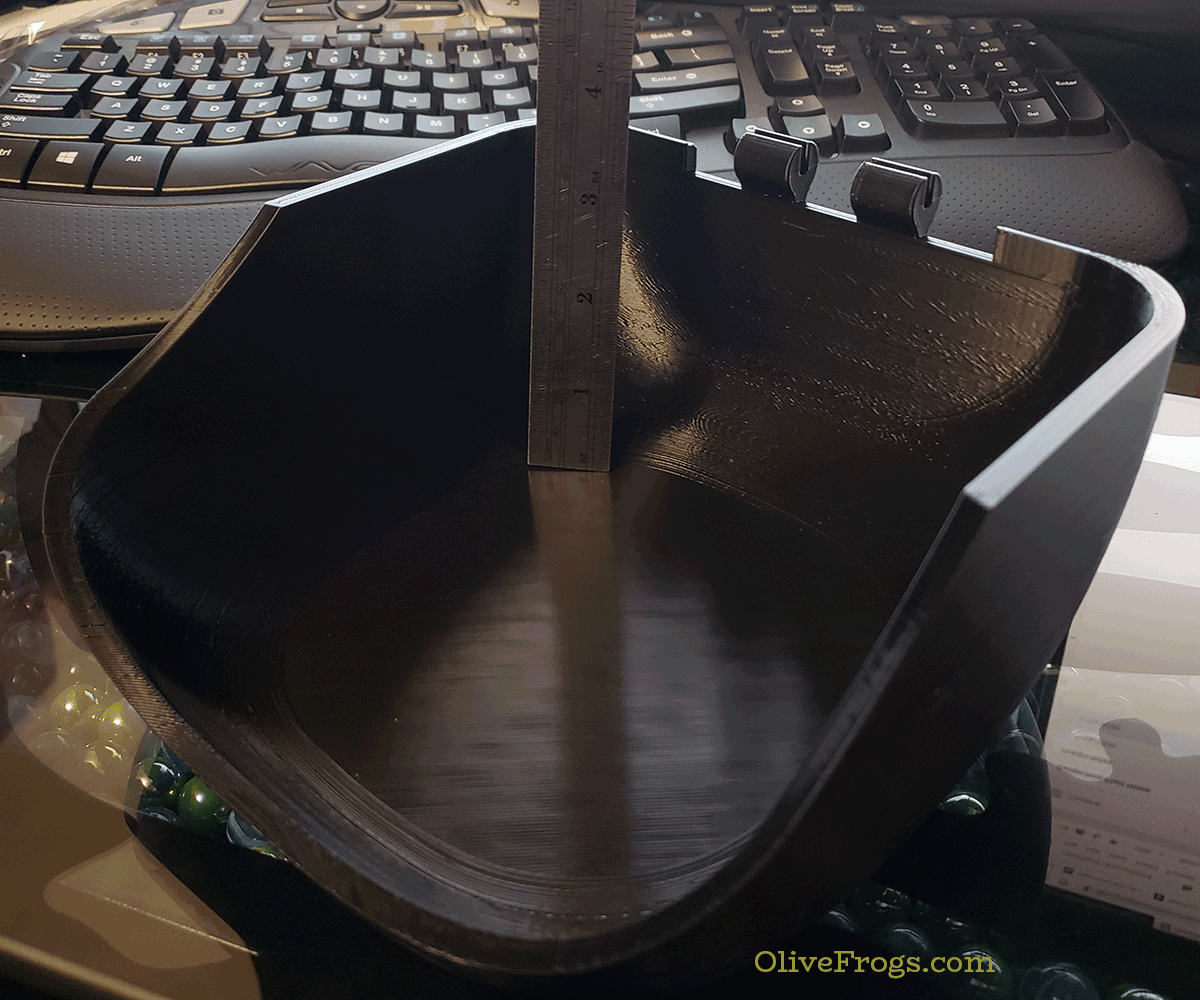 Welp! This was foolish!

I've heard it said when it comes to design and development, iterate quickly and fail fast. I understand that the methodology can be extremely beneficial in product development, but I imagine there are some caveats to that. Fail fast, but fail smart. Avoid silly and costly mistakes. Fast iteration and failing fast is not an excuse for recklessness and half-baked planning and design. I'm still working out the balance between failing quickly and failing intelligently. 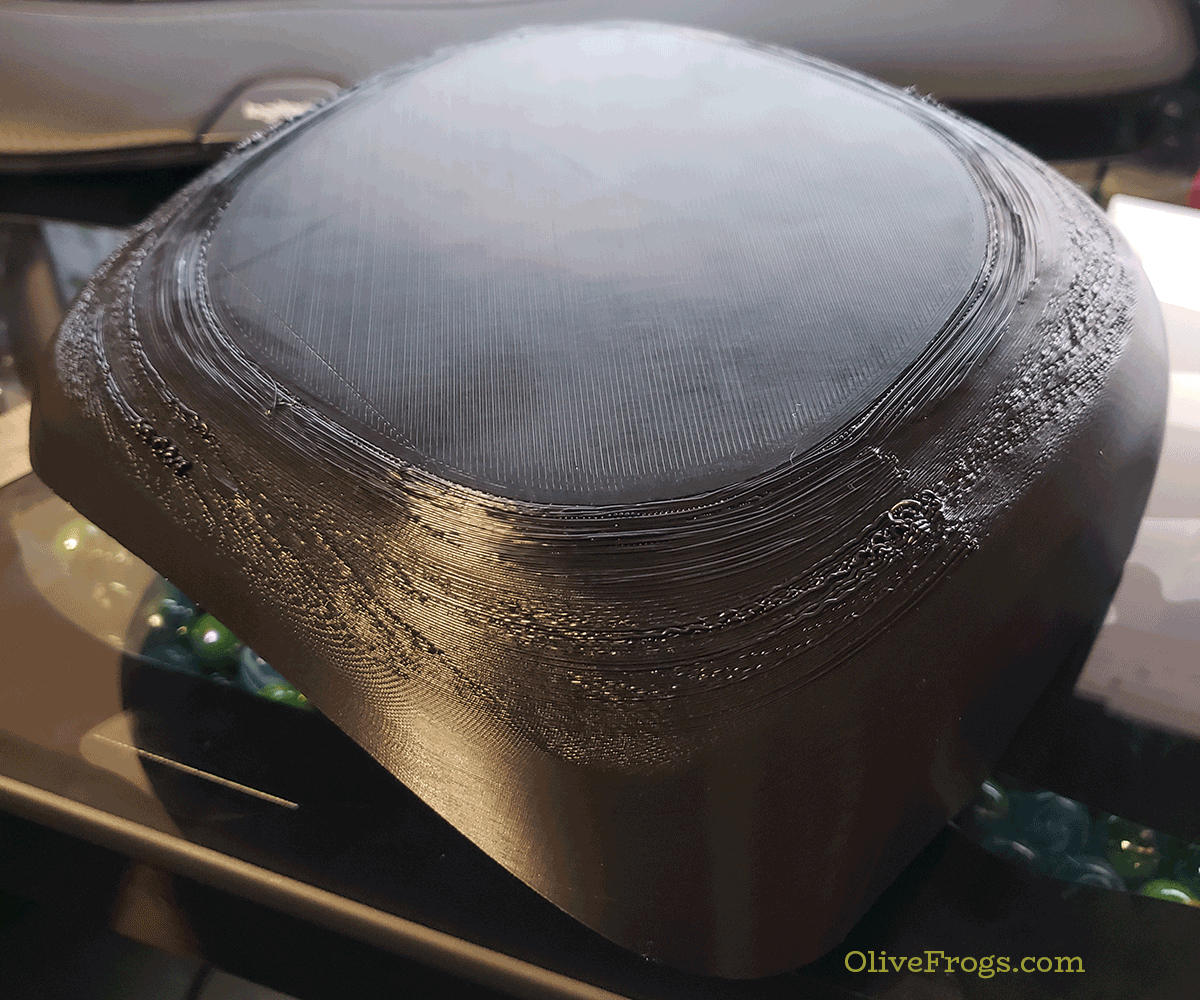 The filets on the print didn't turn out very well without support material. I didn't expect them to be perfect, but I thought they'd be better than this. Perhaps I'll try printing with support next time and see if it turns out better. In either case, I can fix the filets in post-processing anyway, so it's not a huge problem.

I'm not sure if I want the wall thickness of the planter to be 5mm or 3mm. 5mm seems really thick and wasteful, but is 3mm thick enough for a sturdy pot? I won't know until I get some resin and make a couple of test samples at 3mm thick and 5mm thick. Right now, it's modeled at 5mm thick.

I've since completed the engineering requirements of the project and made some changes to the design. It's taller/deeper, and it has built-in ribs to support a smaller pot inside for double-walled potting. I've printed a mini version of the entire head to serve as a maquette so I can play around with sculpting expressions on it. I thought the softened cube shape might grow on me, but I'm still not thrilled with it, so I'll model an oval or egg shape and make another maquette to play with as well. The cube shape could be more of a pain in the molding/demolding process anyway. An egg shape will be easier. My next move on this project is to sculpt maquettes until I come up with something I’m happy with. Afterward, I can return to Fusion 360 for modeling. 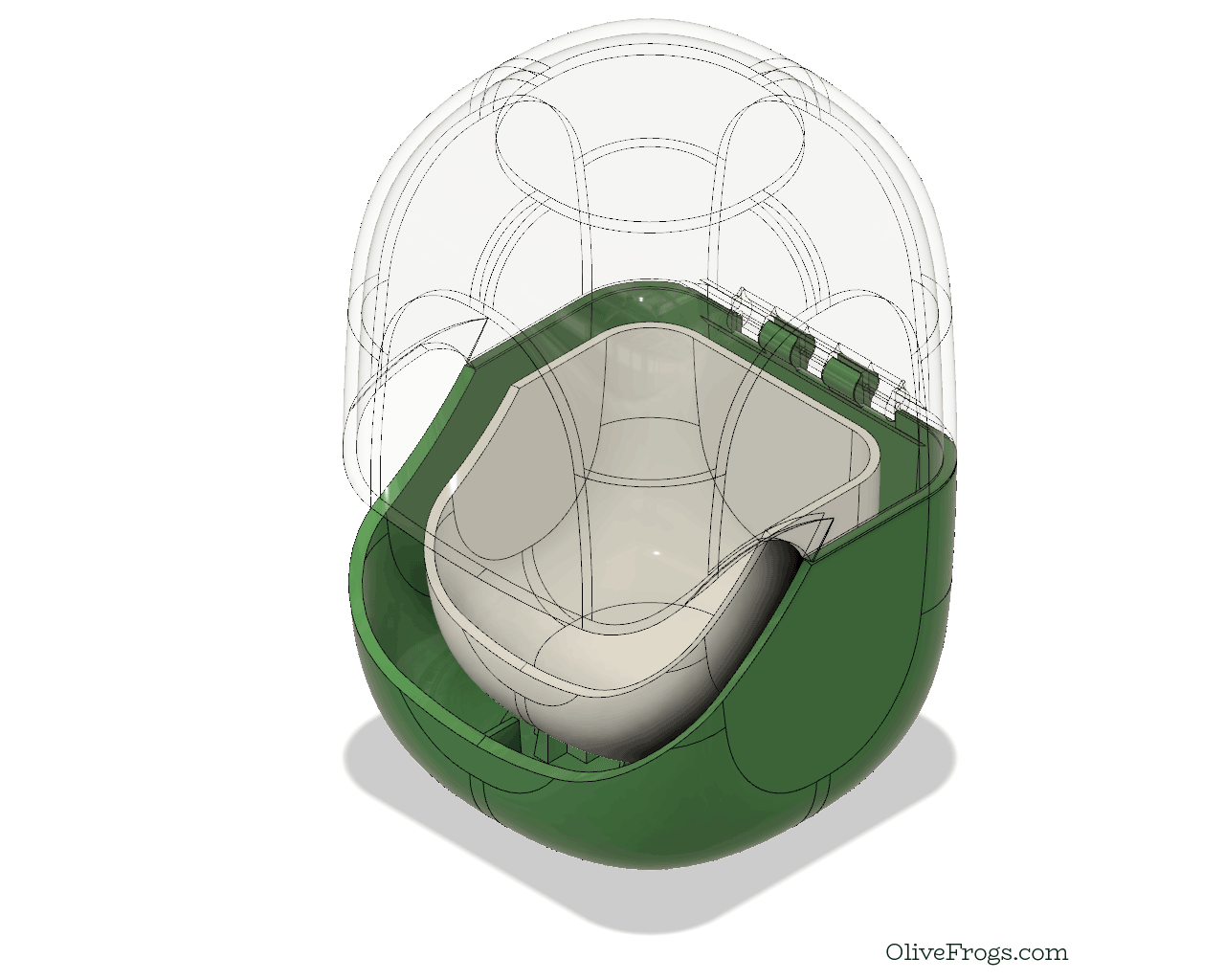 I used to be ok at this

I don’t have any digital sculpting skills, so I’ll physically sculpt this plant home. I probably could’ve learned digital sculpting in the 1 ½ years since my last post. Instead, I was chasing a bunch of other squirrels; more on that later.

Before I do the full-sized sculpt, I’ll test out a style concept or two by creating tiny plant homes. Tiny homes are trending now, right? These preliminary mini sculptures are usually called “maquettes,” the French word for “model.” They differ from prototypes in that prototypes are for testing the function of a design, whereas maquettes usually focus on style and aesthetics. I took a stab at sculpting a mini version of the planter to test a styling concept with clay and 3d printed parts. The results were an abomination. My sculpting skills were never on par with Michelangelo’s, but I had hoped to recall a modicum of the sculpting skills I had back in college. Below are images of Paul Winston, an animatronic cigarette I sculpted/built in college. I need to find these skills again. 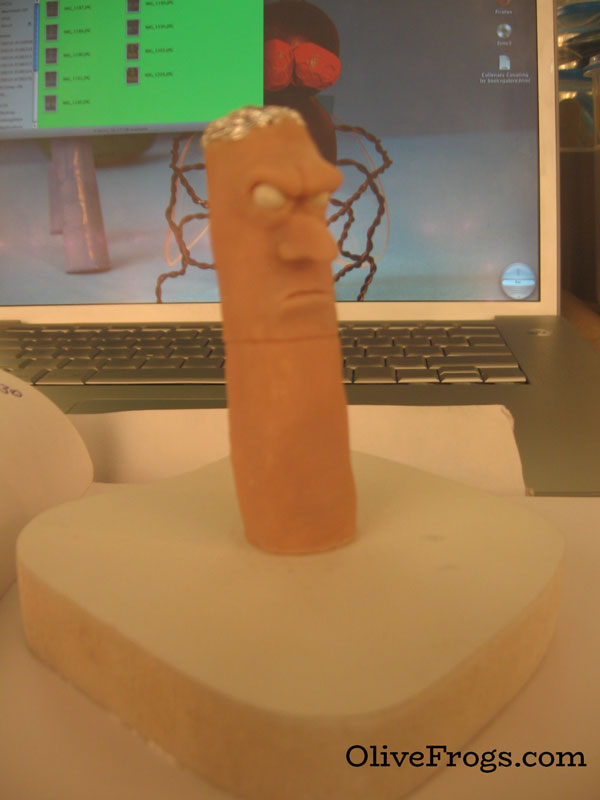 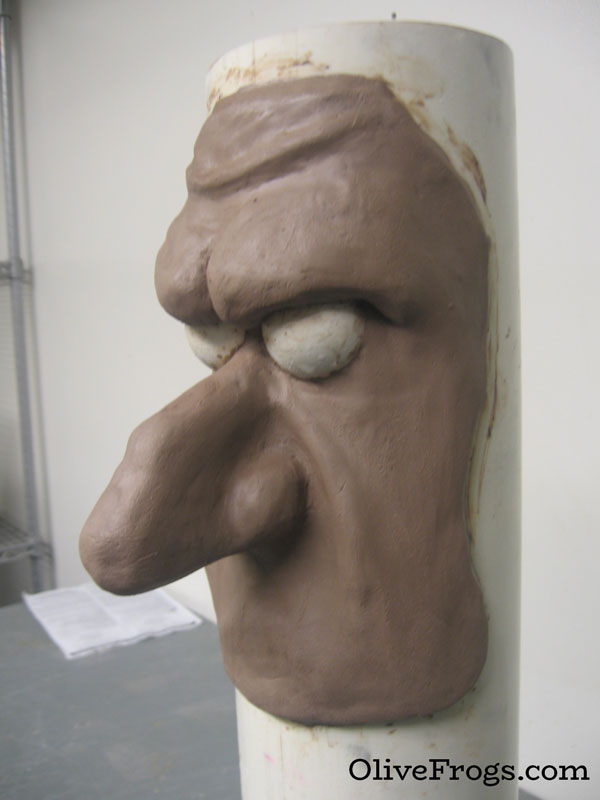 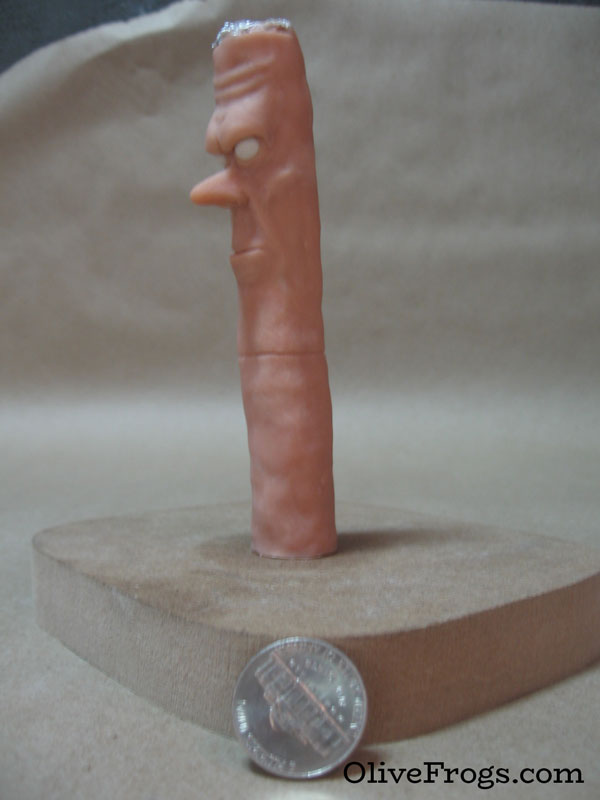 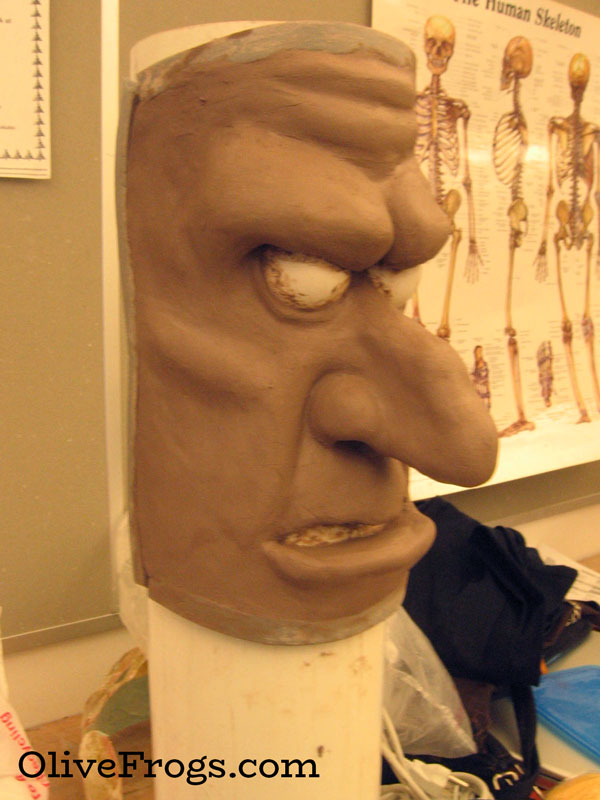 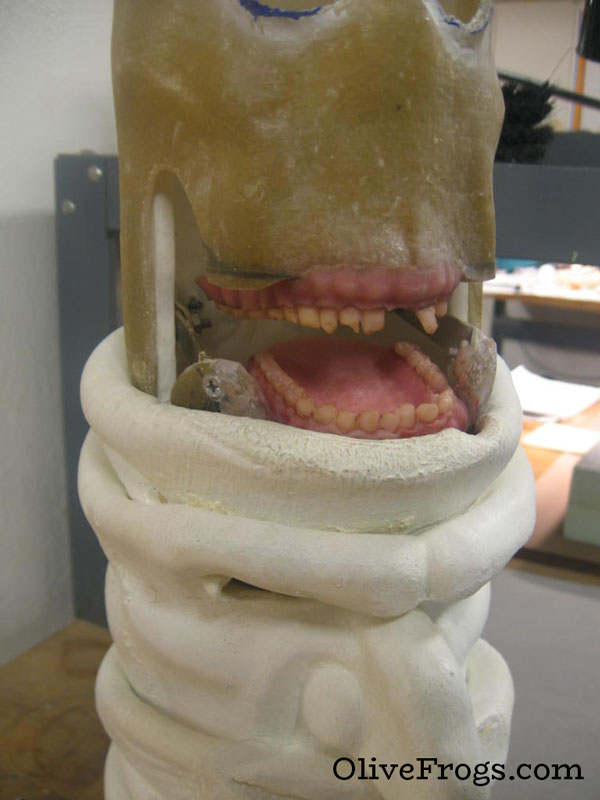 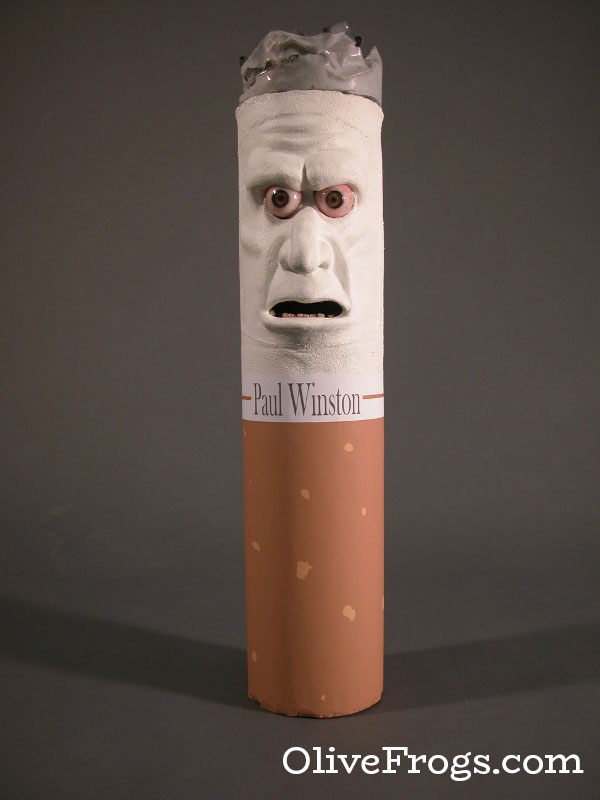 In a single sculpting session where I attempted to model a tiny plant home, the results went from bad to worse. I tried a sculpting clay I had never used before called Fixit Sculpt. Crafsman, one of my favorite YouTubers, uses Fixit Sculpt and its sister product, Apoxie Sculpt, to create his own figures, so I was inspired to try it. Fixit Sculpt is a 2-part epoxy clay that you mix equally to activate. Once mixed, you have about 4 hours to form it into the shape you want before it hardens. After the clay hardens, it can be sanded, painted, or you can sculpt more on top of it.

Four hours may sound like plenty of time, but that finite working time presented a challenge for me. Mostly, I just fudged around stressing about the “small” window of time I had to produce my masterpiece. I thought it might work nicely for sculpting onto 3D printed parts because it would bond to the print, then I could paint the completed maquette afterward. Unfortunately, I’ve never been a fast sculptor; add to that, I didn’t know how I would take the half-baked image of a hungry pot that I had in my head and form it with clay. 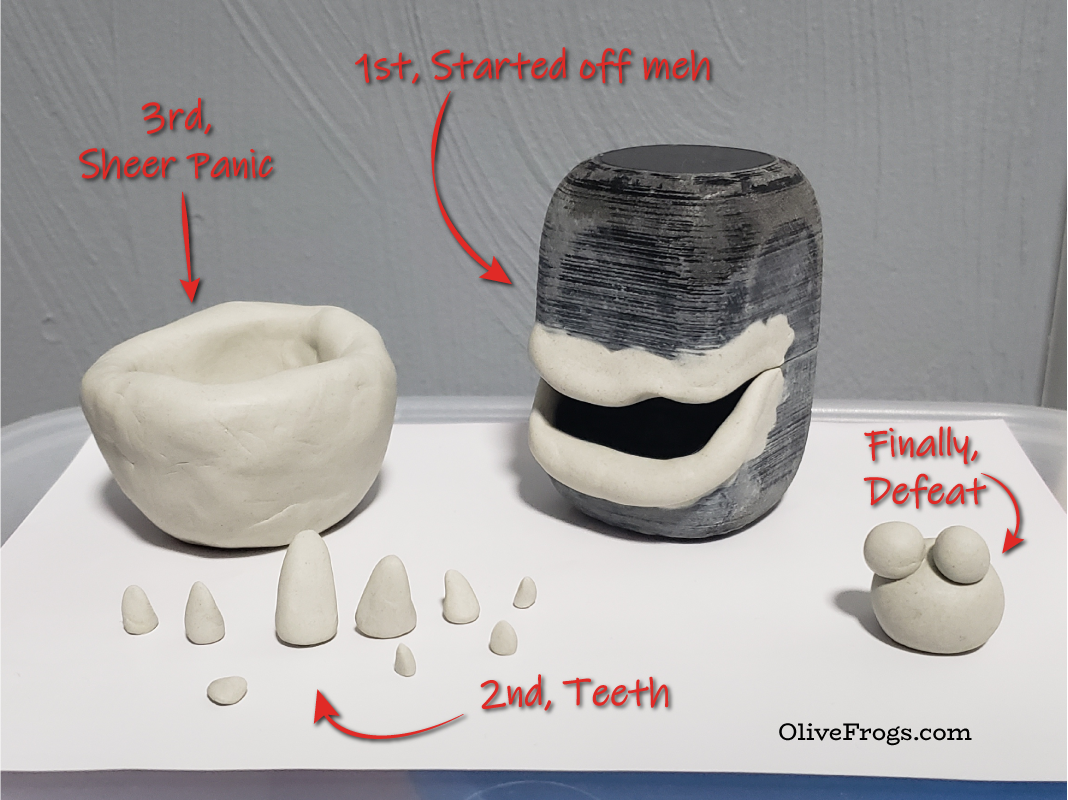 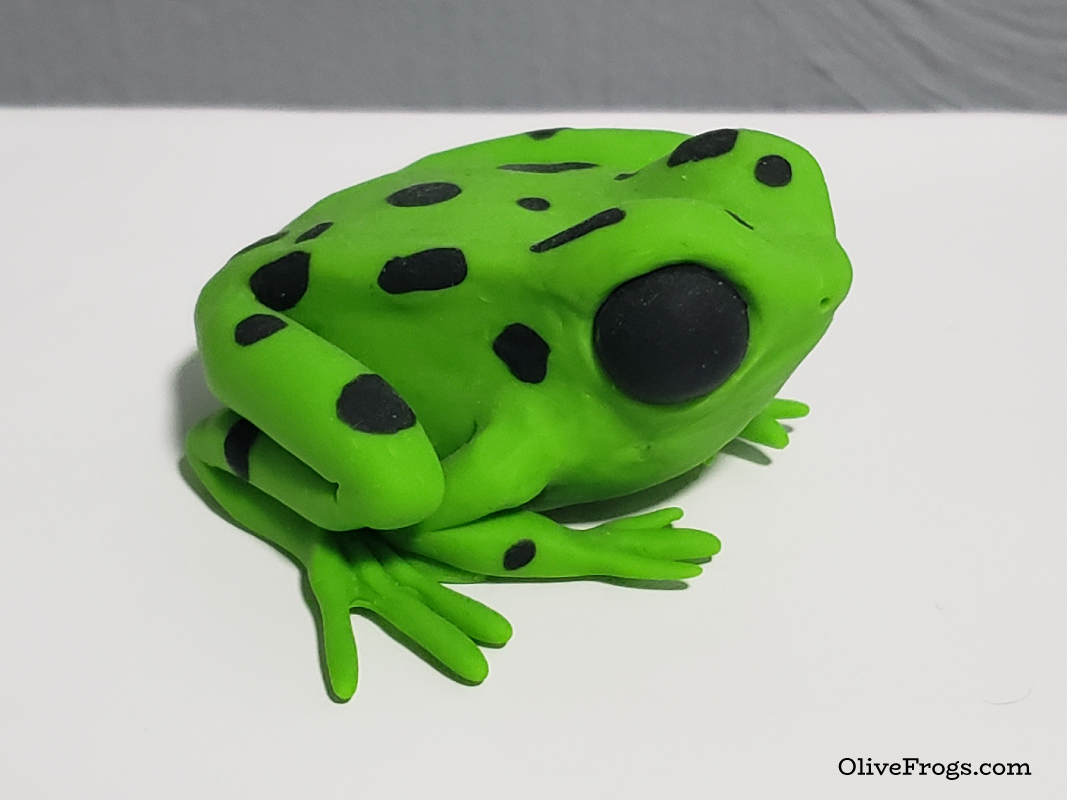 I needed to slow down and take my sweet time reintroducing myself to sculpting. So I later spent an ENTIRE DAY sculpting this completely unrelated frog in a more familiar sculpting medium, Sculpey III, that allows unlimited time for dawdling. Sculpey brand Polymer clays become soft with a bubble-gum-like consistency after kneading and harden only after baking. It is the same type of clay I used to make the maquettes of Paul Winston pictured above. I chose not to use this when I was sculpting the carnivorous planter maquette because I was sculpting on 3D printed plastic, which would not hold its shape in the oven at the 275°F temperature required to set Sculpey III.

While creating this poison dart frog, it occurred to me that I forgot a critical aspect of sculpting; references. Better results come from looking up reference images of what you are trying to create, printing them out, and looking at them while bringing your masterpiece into existence. So, for instance, if you wanted to draw a character laughing, instead of trying to work solely from your memory of what laughing looks like, you’d find a variety of images (photos and illustrations) that show what it looks like when folks laugh. Body posture, eyes, nose, mouth, ears; notice the physical changes that signal someone is laughing. While working, keep looking at the images that show the type of laughter you want to depict in your drawing.

These are some of the reference images I've collected for the planter after some google image searching on phrases like “Hungry” and “Menacing.” Note; I did not create any pictures in the collage below, and I do not own any of them. 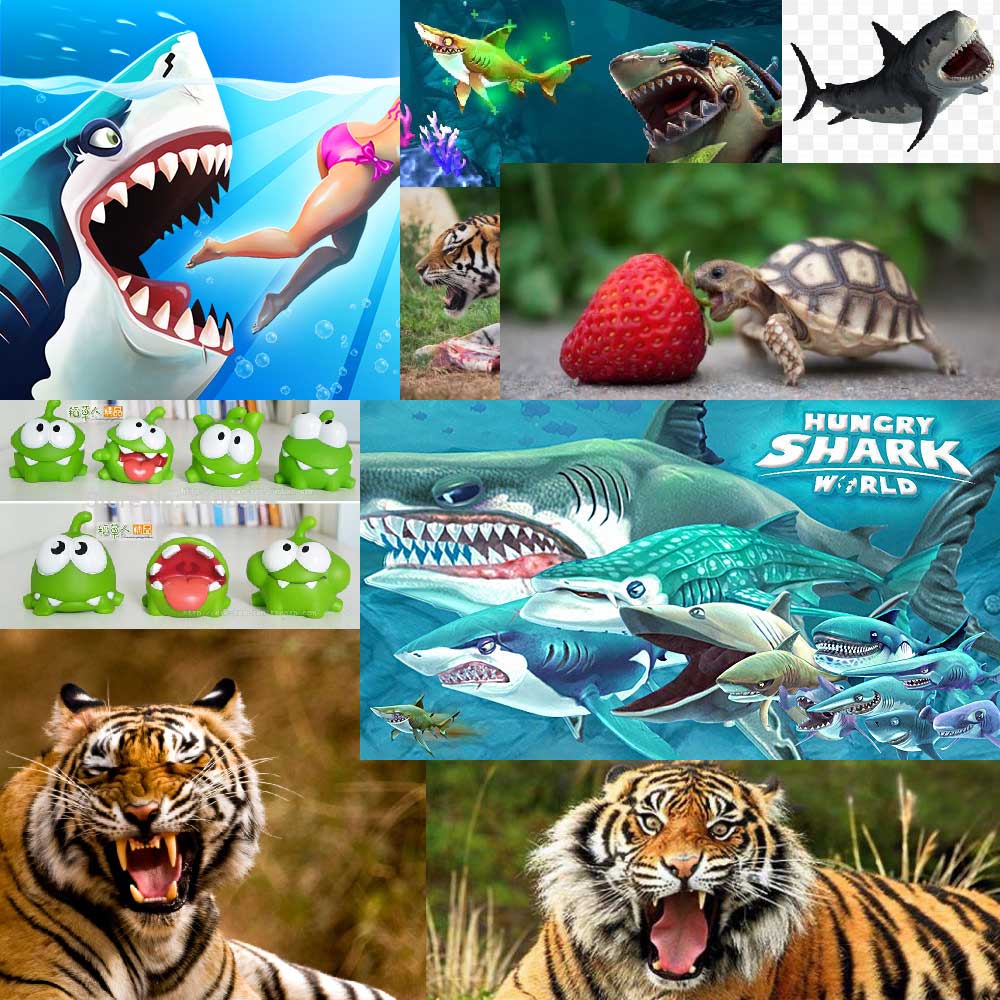 Collage of Reference Images Found in a Google Image Search

Eventually, I’ll take another stab at sculpting a plant home maquette, starting with clay that affords unlimited dawdle time, even if I can’t ever harden it. Then I may create another mini with Apoxie Sculpt if I want a painted maquette. Sculpting the same thing several times doesn’t sound very appealing, though, so we’ll see what I actually end up doing.

I may need to sculpt the teeth separately from the rest of the planter. I’m not sure what clay I’ll use for that. Hard, oil-based clays are not my favorite but, that may be the way to go. Eventually, when I sculpt the full-sized planter, I’ll need to choose a clay that doesn’t contain sulfur. Sulfur inhibits the cure of platinum-cure silicone, which I’ll use to make the mold for the planter. 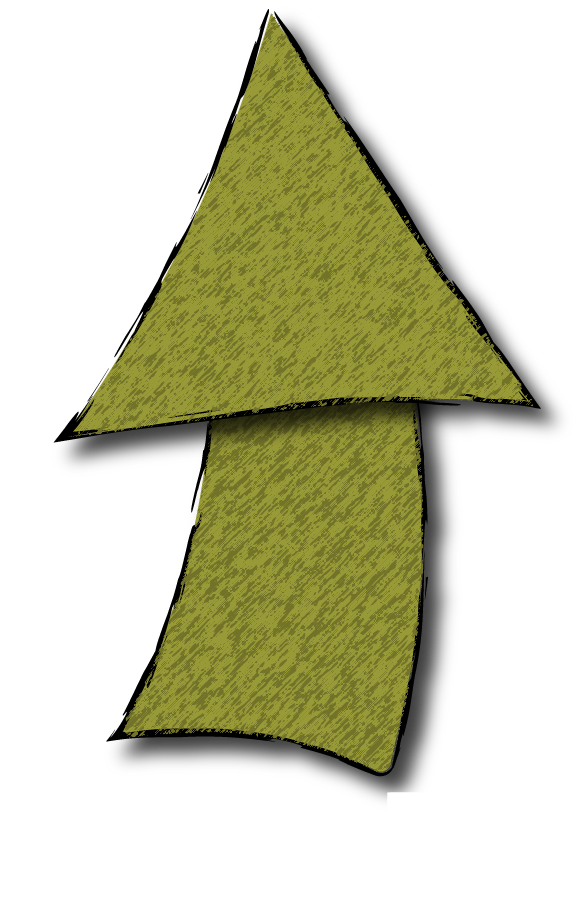